The last few moths have been a bit of an upheaval, not only have we moved house but somehow re-fitting the kitchen, making a couple of new windows, lowering the ground level across the front of the house and building a greenhouse seem to have crept onto the schedule. On the plus side the groundwork is complete, the footings for the greenhouse are almost ready and the kitchen project seems to be on track.

The house situation is now more of less under control and the out of season rush of repair work has not got going yet so if fact if you need anything done in a bit of a hurry, now would be a good time to get in touch!

One of the big benefits of the move has been a dramatic improvement in my workspace; at our previous house the workshop was essentially a slightly stretched double garage, now I have a brand new purpose built 8 metre by 10 metre building with all sorts of luxuries such as insulation a flat floor and lots of light. More space has allowed one or two long needed machinery and equipment upgrades. My previous table saw was frankly not up to the job so I have spent the past couple of months keeping a close eye on ebay. Mostly 10inch saws seem to change hands on ebay for something close to the new price but eventually one cropped up with some indifferent photographs and a starting price which looked too high. A quick email to the seller suggesting he get in touch if it did not sell did the trick and I spent a chilly hour or two taking it apart in an open barn to get it on my trailer. At this end getting it properly set up took somewhat longer, not helped by the usual scrappy manual badly translated from Korean. The end product, once fitted with a new industrial grade blade, is a whole world more capable than its predecessor which has been adopted  by my brother in law. 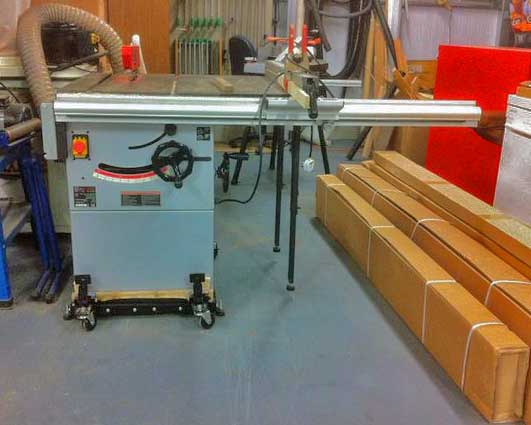 The new saw in all its glory