Growing up 5 miles from the sea, boats seem to have always been part of life. My brother and I made countless model boats, powered by sails, model engines, electric motors and even a rocket motor. Most of these boats had a short and eventful life on the large pond behind our house, they were much  repaired and modified; with time they gradually become less basic to the point where crude home made  radio control became a feature. At about this stage I moved on to model aeroplanes and my brother took to making guitar amplifiers.

Full size boats started with a 7’9” “Yachting World” plywood pram dinghy that my uncle built in his front room as a project for the television programme that he presented. He was a talented DIY man rather than a boat builder and it showed but never the less the dinghy lasted over 40 years and at least 6 children lernt to sail in it.

Somewhere in the barn of a local farmer Dad unearthed an ancient clinker boat with a tall gunter rig and a massive steel centreplate. She had not been near the water for may years and was half buried in rubbish but amazingly was still sound and even the cotton sails were usable. Dad said she cost £5 but he said that about many of the things which he bought from unlikely places.

Marjorie was 14′ coated in 1/8” of antifouling below the waterline and so dry that you could see through all the seams. Between us we scraped off the worst of the old paint applied new, re-varnished the topsides and tried to work out what the variety of ropes and old blocks were supposed to do. Various local pundits and sages pronounced that she would fall apart, sink or “take up nicely”.  In the end she was launched in the pond at home where she promptly filled up and settled on the muddy bottom. Left well alone for a week she quietly sorted herself out and became surprisingly watertight. There was much speculation and argument about what class of boat Marjorie was, she clearly wasn’t any of the well known local designs and for some reason it was decided that she was a Berkenhead One Design. I am not at all sure that such a class ever existed and she was probably just one of a small series of boats produced by a builder in response to local demand.

For the adventure out into salt water someone decided we should learn how to sail properly: enter “Pinky” and “Snowball (or Snowy)” Hewes. These two brothers were among the last people to earn their living fishing the East Coast under sail and looked to me age 7 to be ancient. I guess they were in their  50s and as Pinky’s son (also called Pinky) puts it “they had a hard time, them old boys”.  I have no idea what these quiet, tough, dignified men thought of us but they seemed happy to be out on the water and pleased when we got the boat sailing well. They clearly could not always understand why we got things wrong and teaching was more by demonstration than by explanation, sailing was as automatic to them as walking. Somehow they got across their deep relationship with boats and the sea. I can still hear Snowy’s “luff her up a bit” as I sail a boat to windward.

Sailing off the mooring 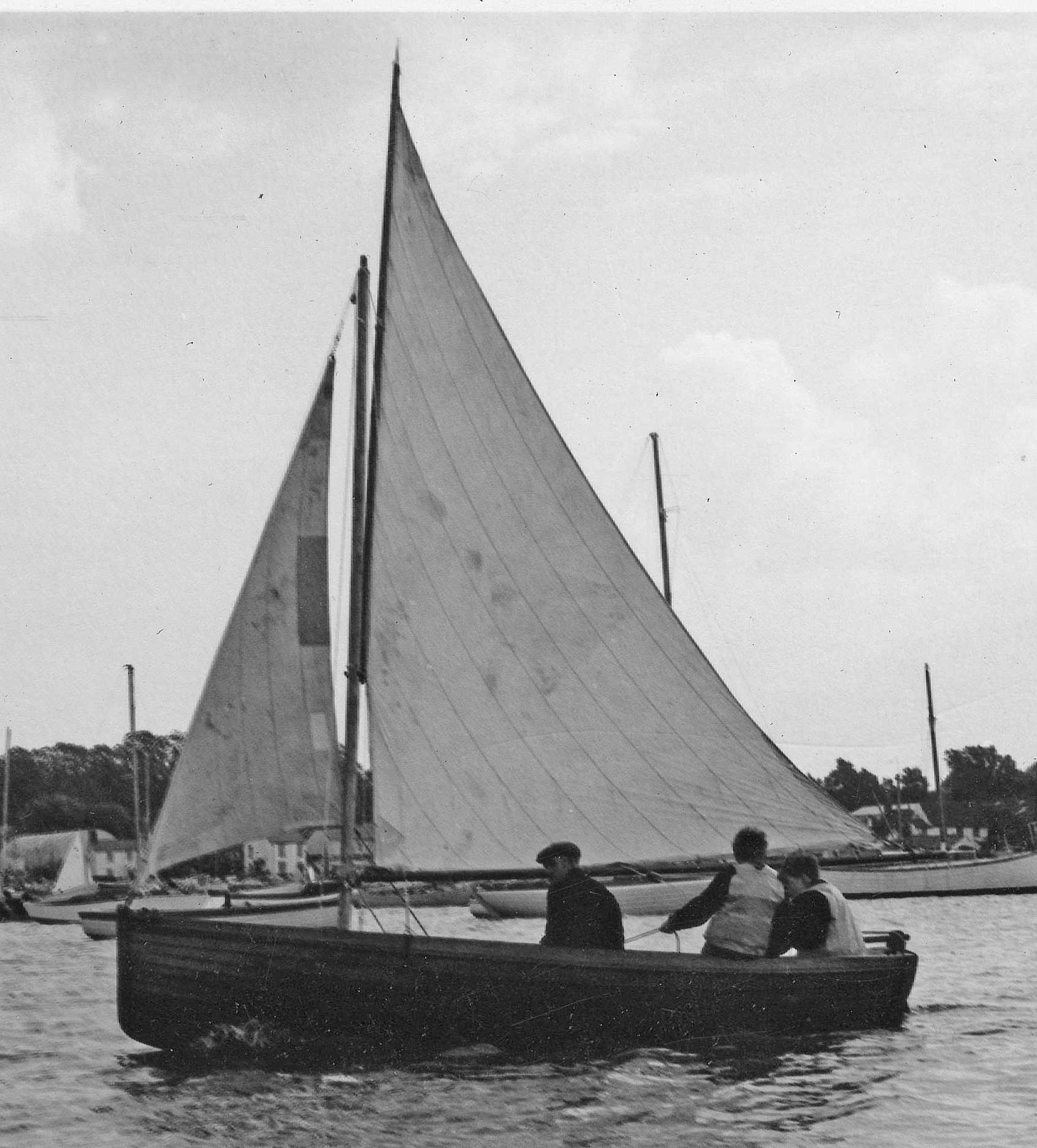