Although he lives on the the isle of Skye, Iain Oughtred is in fact Australian and was born in the outskirts of Sidney. During the many years he has lived in Britain, Iain has become one of our most highly regarded designers of small wooden boats with well over 100 published designs. In recent years he has also come to wider notice through the St.Ayles Skiff that he designed for the Scottish Coastal Rowing Project in which groups in coastal communities come together to build a skiff and then race against other towns. Started as a way to help re-invigorate small Scottish coastal towns, the project has taken on a wider existence with St.Ayles Skiffs built in many places outside Scotland; many in England but also across the world. The first world championship was held in summer 3013 at Ullapool with over 30 boats taking part.

Iain has developed a deep understanding of the traditional boats of Scotland and their Scandinavian ancestors, he has also sailed and rowed a huge variety of small boats both competitively and for leisure over many years. As a result Iain’s boats tend to both look right and work well. A lot of years ago I met Iain at the short lived Wooden Boat Show at Greenwich and have treasured his catalog of designs ever since.

No big surprise then that when it came to building a boat for myself it was to be an Oughtred design. Eventually I settled on one of his double ended boats with its design derived from the Yoles and Foureens of the Scottish islands. Iain has designed a whole family of these boats but deciding which was easy; only the smallest would fit into the building space available ( fortunately I now have three times the space).

Ordered directly from Iain, the plans arrived in the most beautifully addressed envelope I have ever received ( he is a trained calligrapher) and the plans themselves were works of art. Better still they include full scale patterns for the aprons, stems and the building molds so no lofting was needed.

Like most of Iain’s boats Little Tern is ply clinker construction with the laps between “planks” filled with epoxy resin, this makes for quick construction, light weight and efficient use of timber resources.

The plywood was Robbins Elite which a high quality plywood with a good compromise of weight and strength; it is also easy to obtain which some of the other high grade plywoods are not. For the solid timber I used almost entirely Douglas Fir partly for its versatility and partly because I found a local source of some particularly nice timber. The only components made from other woods were aprons (inner stems) laminated from iroko, the outer stems laminated in cedar (because I had some) and the rudder cheeks made from mahogany (again I had some lying about). 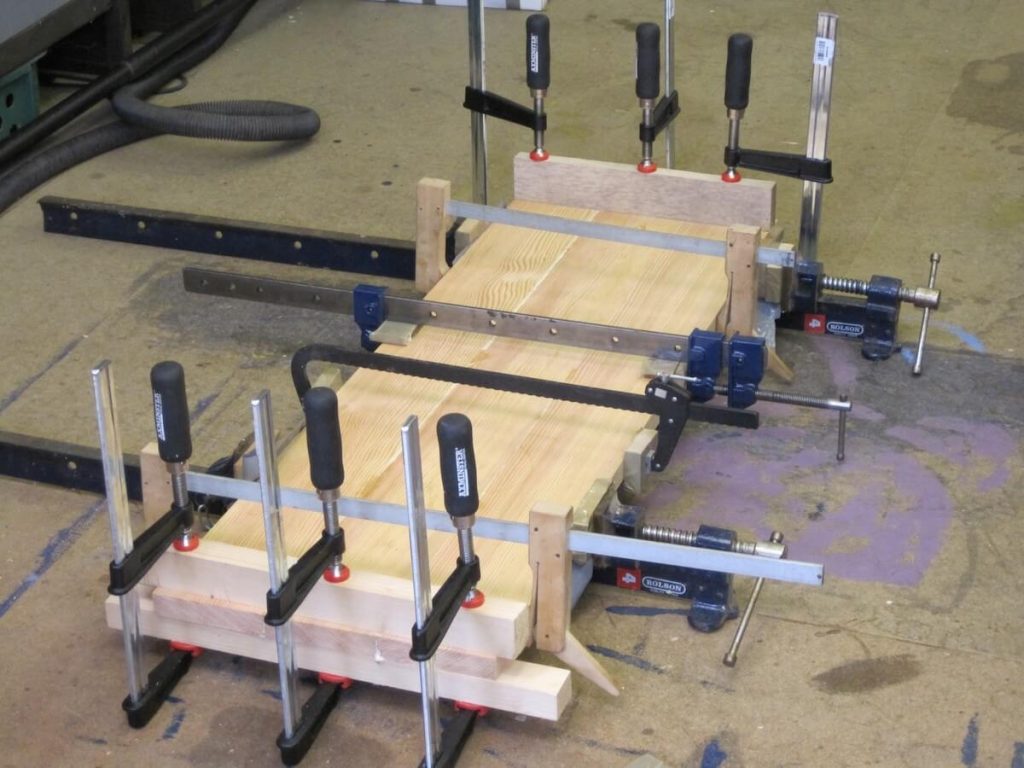 Making up the blank for the centreboard whilst there was still room. 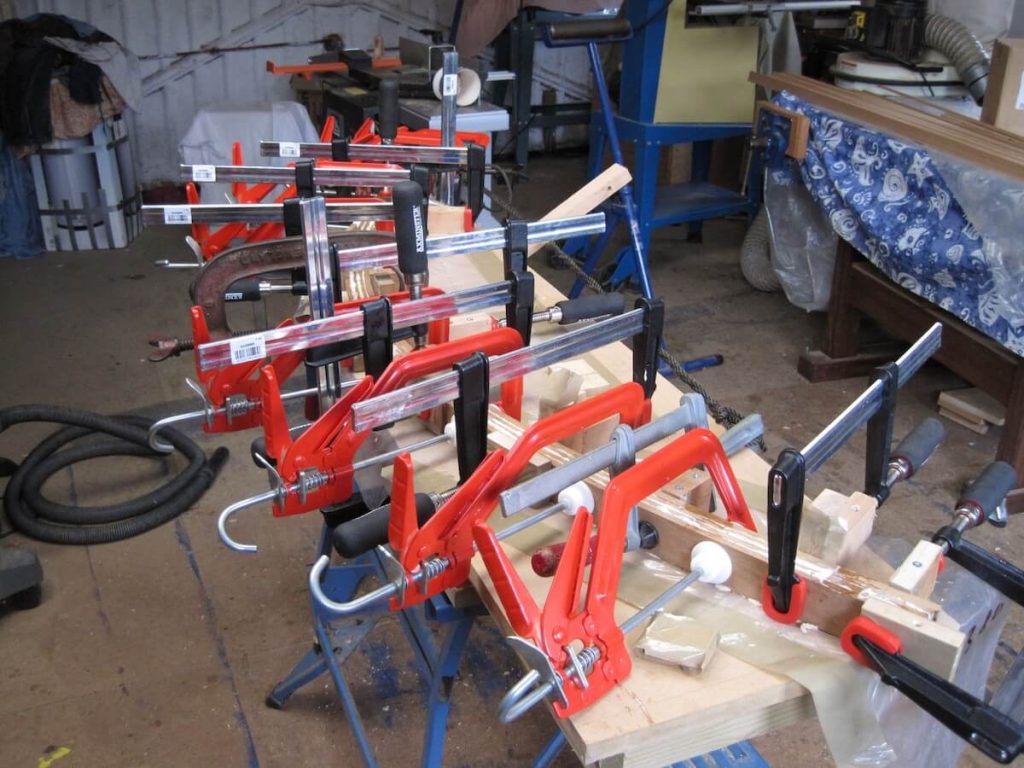 Often these boats are built more or less entirely with epoxy resin but I find moisture cured polythene glues useful for lamination and other jointing where there is close contact between the two sides. Where gap filling is required epoxy really comes into its own. 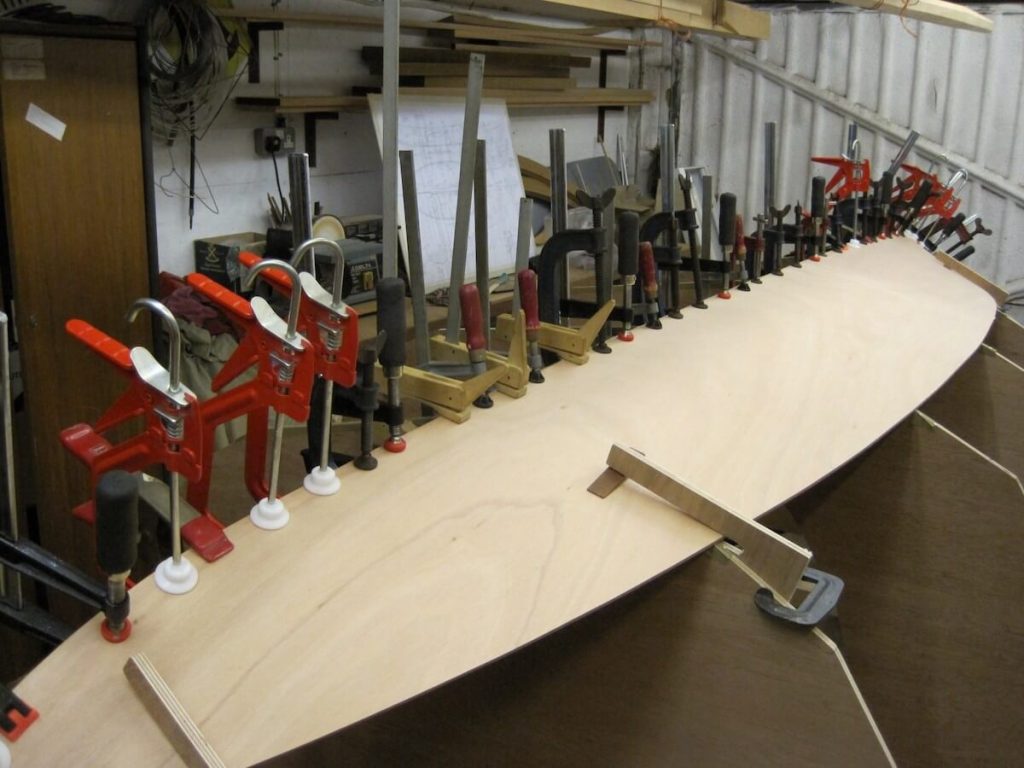 The first garboard going on

The explanation for the huge number of clamps is that there are no permanent mechanical fixings in the garboard seam – or indeed anywhere on the boat apart from fastenings for fittings. 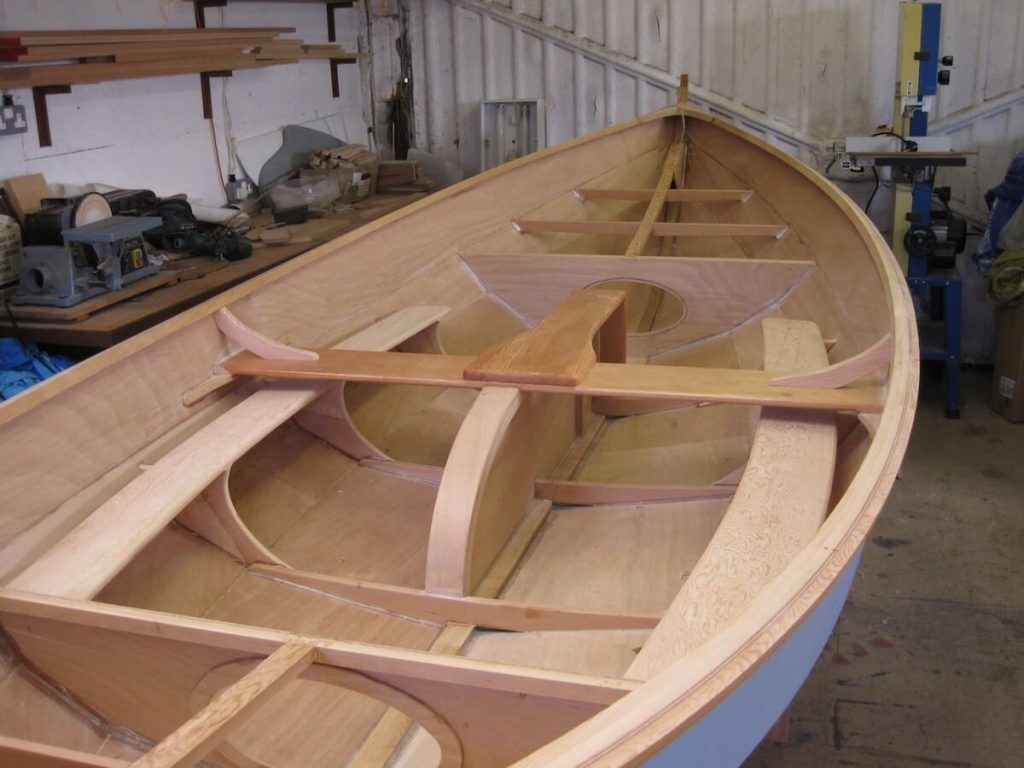 Once the hull is complete I always feel as if I am nearly there but of course more than half the work is yet to come. 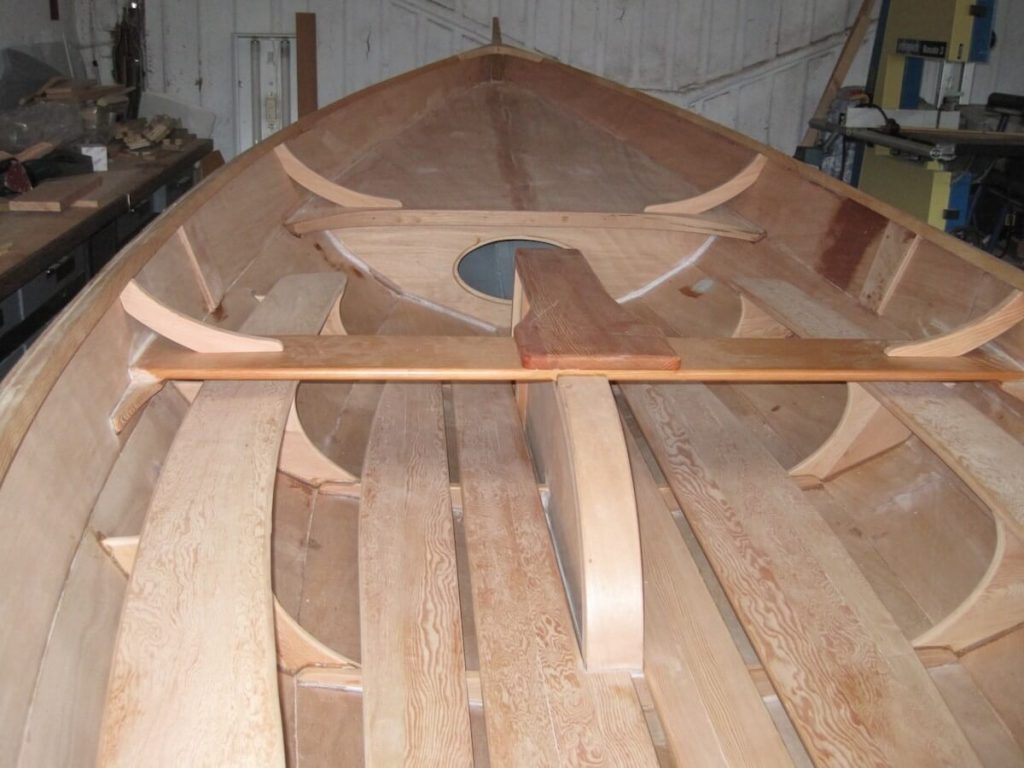 Even in a 15ft boat there is an awful lot of sanding to be done. It is not an exciting job but it has to be done if the final finish is to look OK. 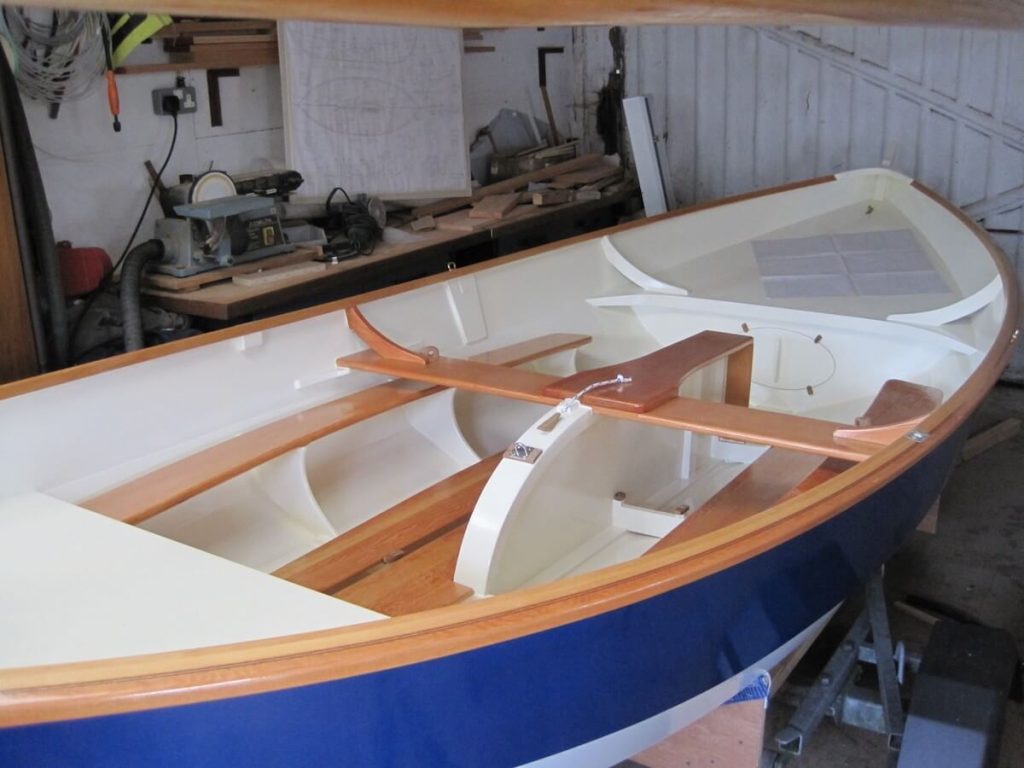 Iain Oughtred recommends “traditional colours” before having to admit that he not really able to define what that means.

I think the pale cream interior offsets the varnished brighwork well and I am pleased with the combination of a rich blue sheer-strake on the pale grey hull. 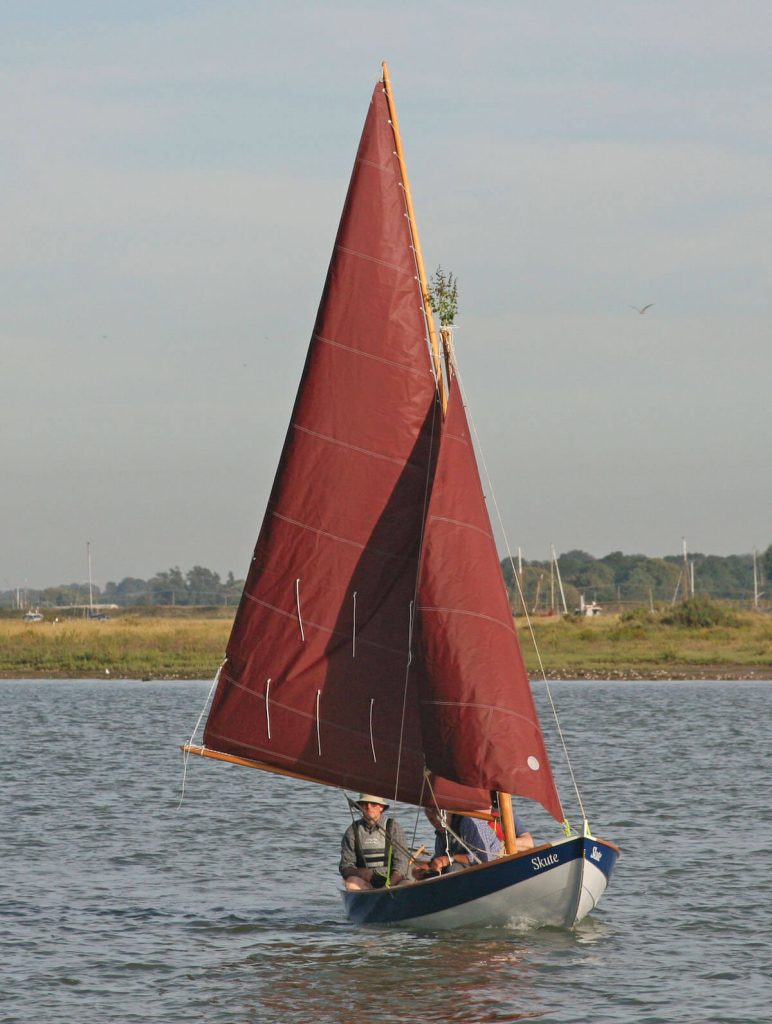 Launch day, with the traditional branch at the masthead. 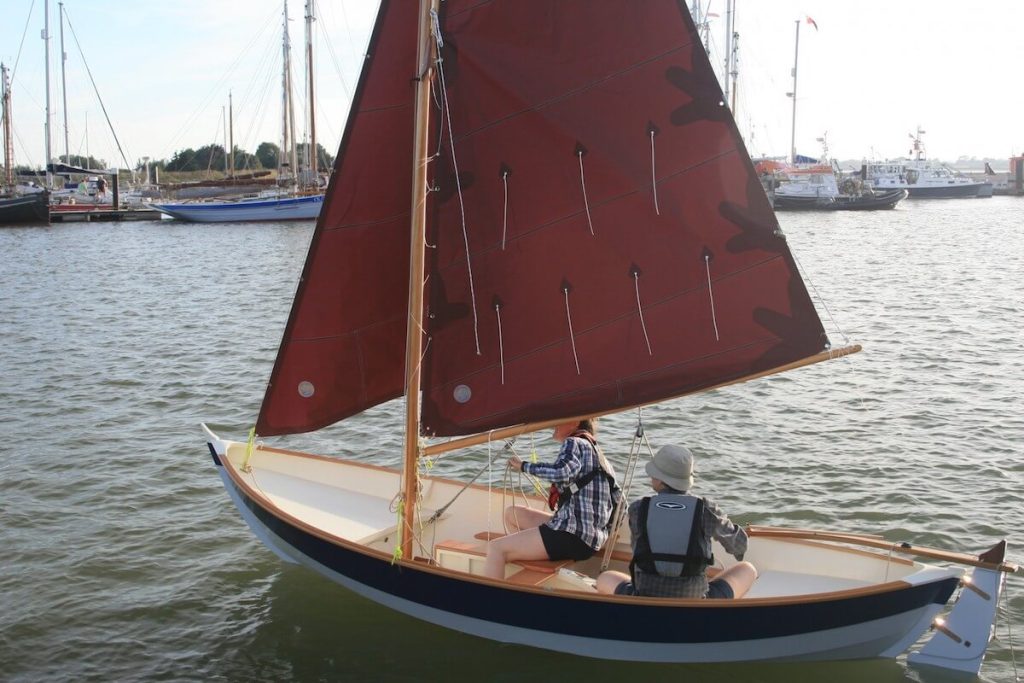 If you did everything that various traditions demand to obtain good fortune for a newly launched boat you would never get it in the water! The branch at the masthead representing Yaggdrasil the tree of life, seemed appropriate to her Norse heritage.

The name “Skute” by the way is the Norse word for an everyday small boat so it was an obvious choice.