Spar making is often considered a bit of a black art; in fact it is quite straight forward but is a painstaking process and labour intensive. You also end up with an awful lot of wood shavings on the floor.

First you have to prepare for a financial shock: Sitka Spruce which is the timber of choice for small masts, booms and gaffs is beautiful timber, it is light, strong and clear grained but it is not cheap. Rough sawn timber for a Sitka dinghy mast is likely to cost over £100. Douglas Fir is a cheaper alternative and also an excellent choice but it is significantly heavier especially if you use slow grown high quality timber. Spars are often built up from two lengths of half the final thickness, even when there is no sail track and the spar is solid; this is because the end product is more stable and there may be a significant saving in material cost.

Design may be determined by class rules, specified by the designer or simply a question or what “looks right”

This mast for a 12 foot clinker dinghy was designed on a piece of scrap paper then drawn out full scale on the lofting floor to make sure that it looked OK. The design was largely determined by an existing set of sails! 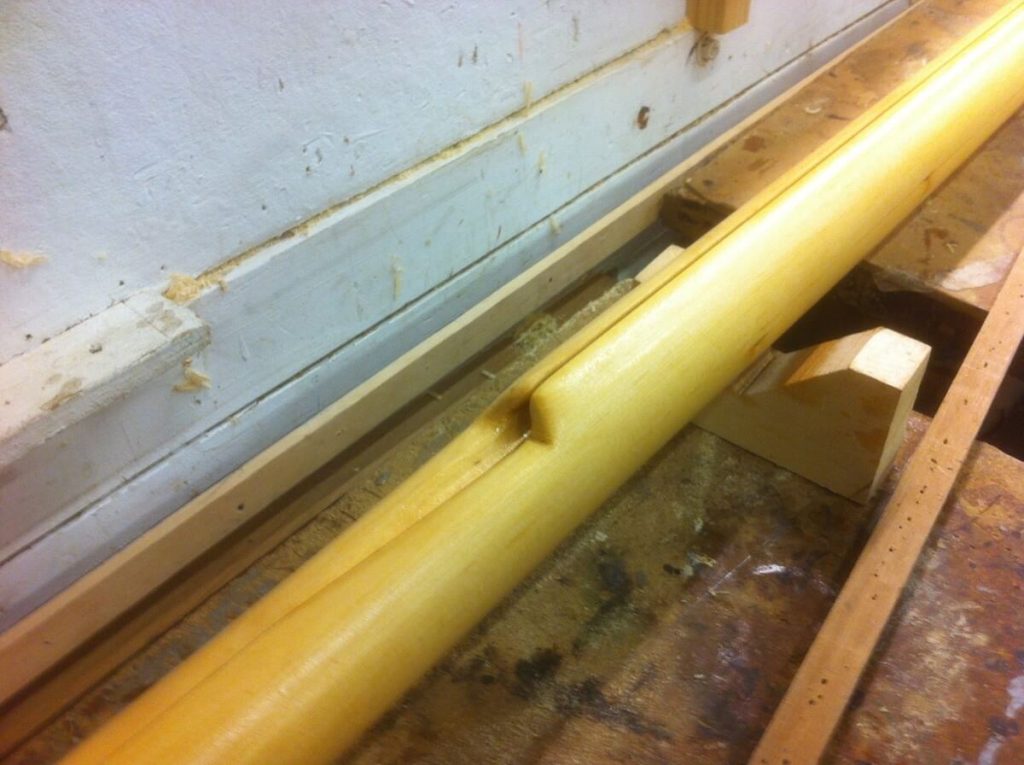 The sail has a bolt rope on the luff so a track is needed in the back of the mast to accommodate this and unusually the lower three feet of the sail is laced to the mast so the track terminates at a “gate” three feet above the gooseneck. 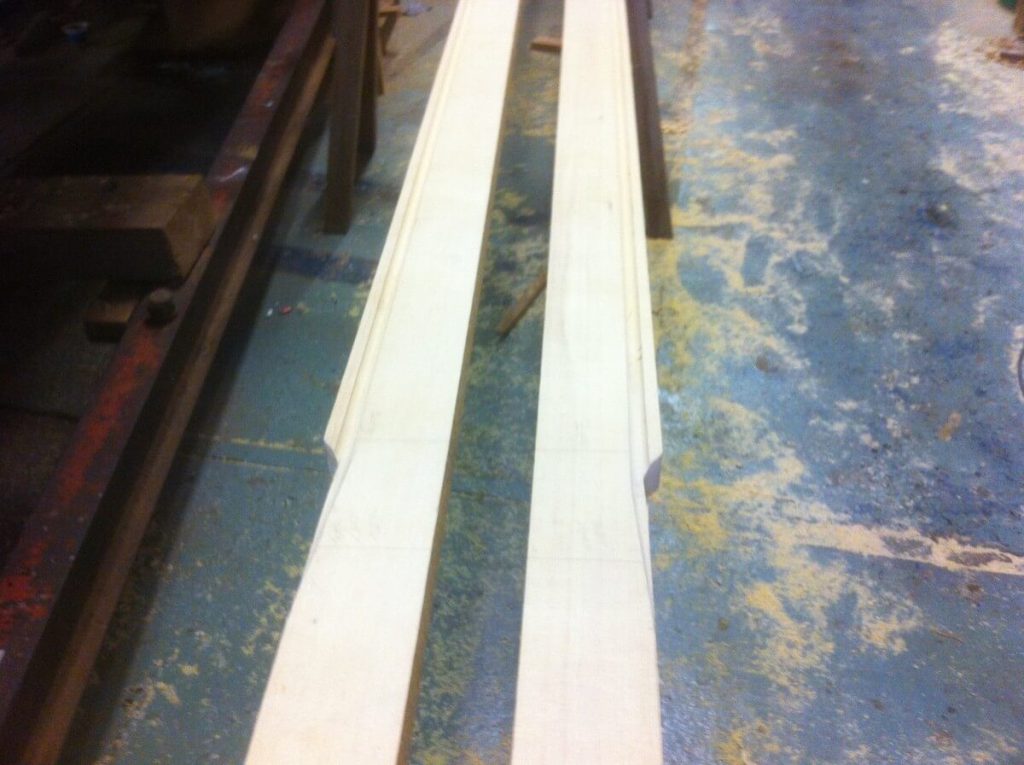 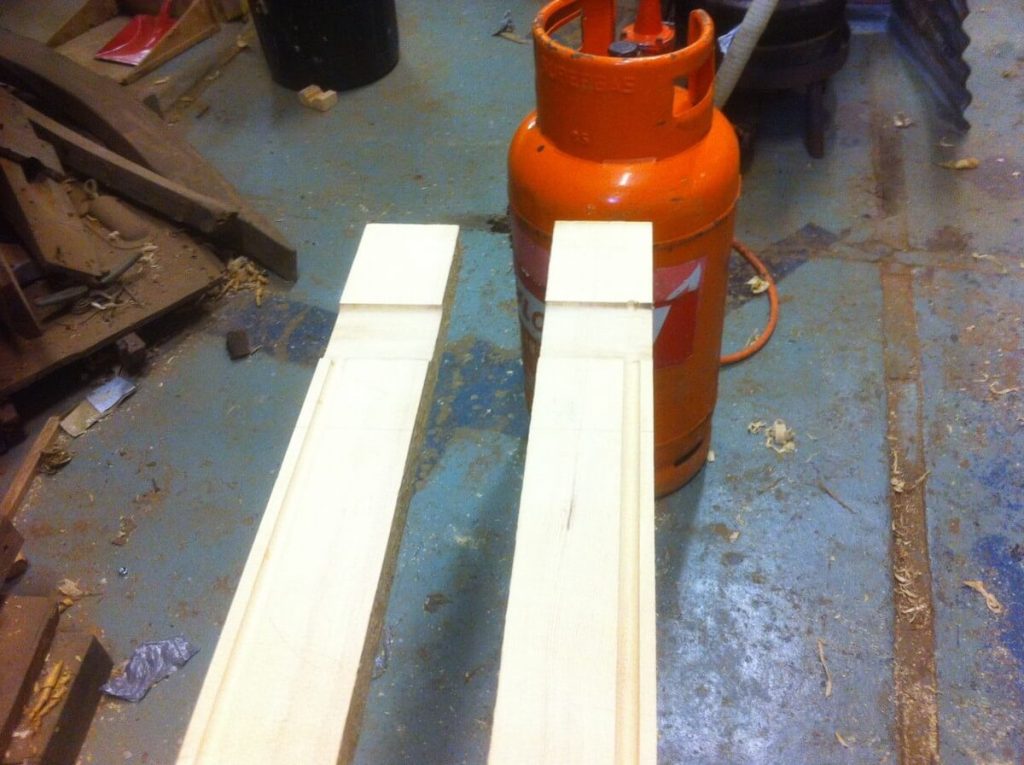 One of the fundamental rules of boat building is that you never have enough clamps:- 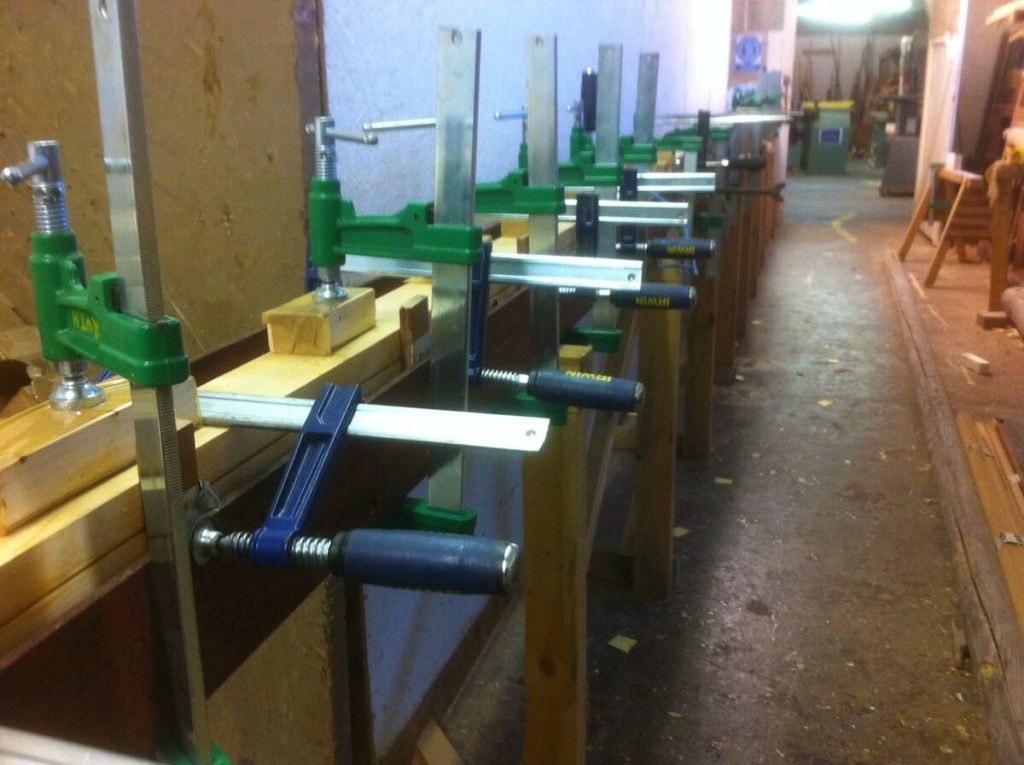 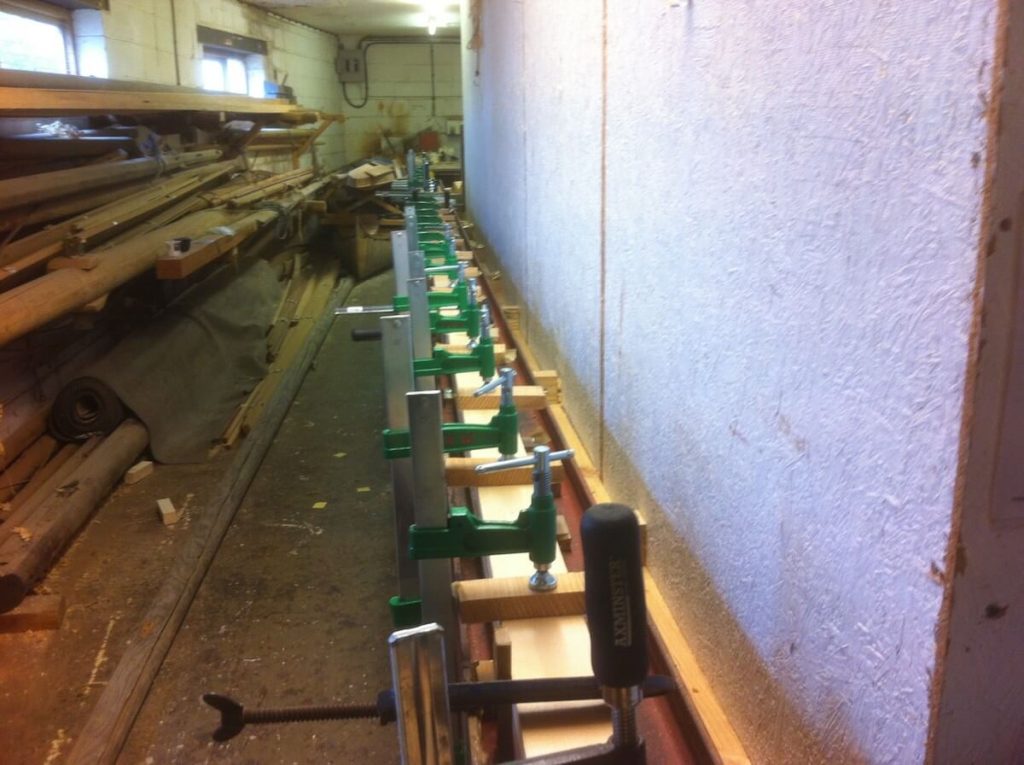 It is vital that the two halves of the spar are straight when glued together, here they have been clamped up on a heavy steel RSJ. Resorcinol (phenolic resin) glues are most commonly used because although they are demanding to use they very secure and are the most weatherproof of all wood glues. This mast being small and intended for a dinghy was glued with epoxy resin.

Once the two halves are glued up you have a square beam from which the round or (as in this case oval) spar is developed. Any taper is cut prior to rounding.

A spar gauge marks lines on each flat face spaced in the ratio 7:10:7 which guide converting the square cross section to an octagon. A lot of wood has to be removed and either a draw knife or an electric plane make quick work of bulk stock removal although with either it is easy to remove too much! 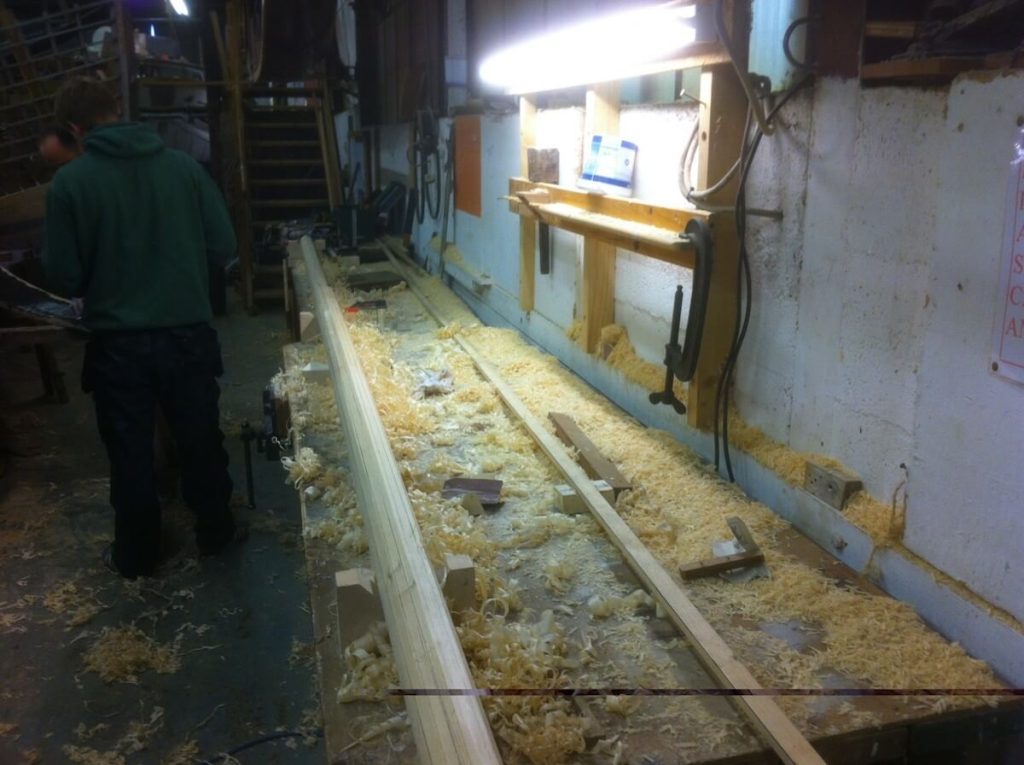 A second set of lines along each flat spaced at ratio 5:9:5 guides progression from 8 sides to 16. From there on it is freehand to 32 sides then rounding with a curved scraper and or sandpaper. In the USA it is quite common to leave spars with 32 sides which works fine a may save some time although your planing has to be dead accurate or it looks dreadful.

Spar making can be a deeply satisfying process, it looks almost impossible when you start out but if you follow the rules and carry out each step accurately almost by magic you end up with a round, even beautiful spar! 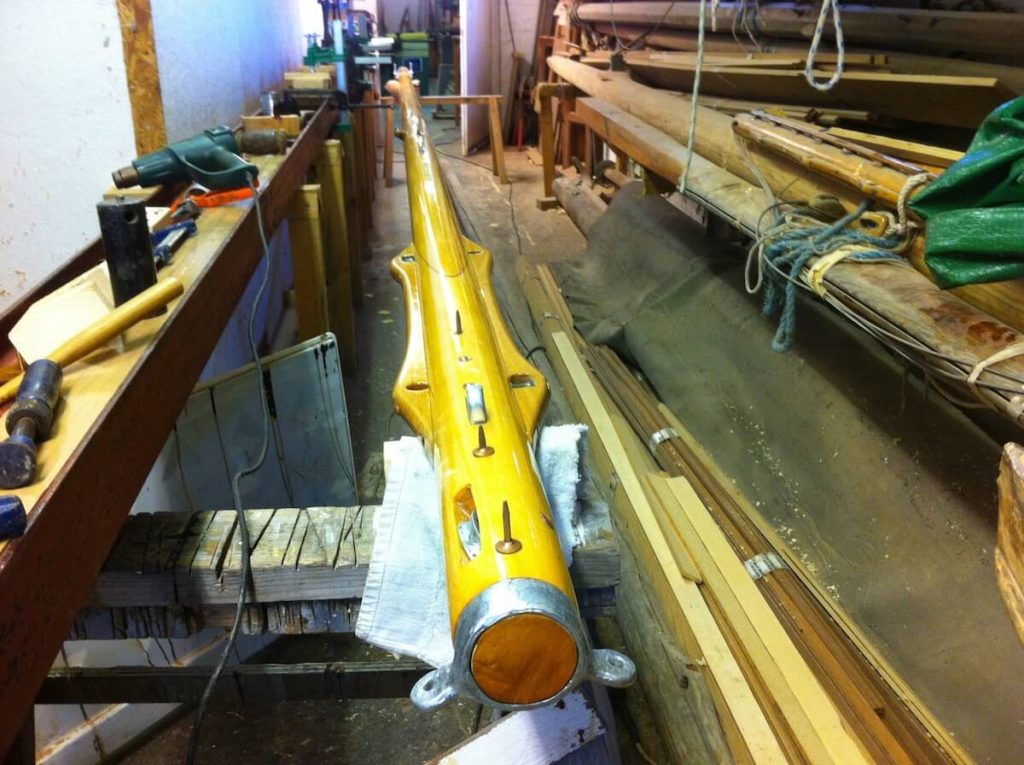