Malcolm Goodwin made his name mostly by building plywood racing dinghies to impressively high standards. He designed the Nutshell for his children to learn to sail in and judging by their later achievements it did its job pretty well. Subsequently Malcolm sold kits of parts for some years before selling the whole project on to the Barrow Boat Company who were then taken over by Greenway Marine in Norfolk.

With it’s pretty looks and adaptability as a tender or sailing dinghy it seems to have been quite a success with over 200 built-in all. I am not sure whether Malcolm had the idea of marketing it as a kit from the outset, I suspect that he did. Certainly the building process is much simplified by the use of indexing holes drilled in the planks and the use of the bulkheads as building molds.

I first came across Malcolm and the Nutshell at the short-lived and slightly half-hearted Ipswich East Coast Boat Show where standing rather forlornly on a tiny pitch was much the best looking boat of the show. It was a few years later that returning to this country after a couple of years abroad I bought one of the last Goodwin kits and put it together.

The Nutshell is remarkably stable with its wide bottom board and is a very seaworthy little boat. It rows well but its sailing performance is limited by quite poor progress to windward. I believe a number of them have had a short bowsprit and jib added which improves things a lot. 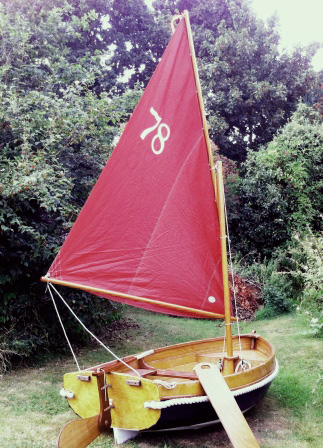