My father was never short of a project; usually it was cars, tractors or ancient farm machinery. Then there was a bus converted into a motor-home and and a folding caravan. Following the theme of family holidays he decided the time had come to have a boat in which we could all explore the local estuaries.

All along the east coast in the 1950’s and 1960’s the word was out that the cheap way of getting afloat in you own boat was to buy a redundant ship’s lifeboat or ex-military launch and convert it into the boat of your dreams. A few of the results can still be seen and whilst not beautiful they clearly serve their purpose. Several of the conversion enthusiasts went so far as to publish books recording their efforts with advice for those who might follow after.

Pictures and plans were drawn, the Exchange and Mart was consulted and a 24ft. aluminium alloy lifeboat arrived; I think it came from a navy surplus yard in Woolwich. This was followed by an elderly Perkins horizontal twin diesel and an uncountable number of ex army stainless steel bolts congealed into great lumps by preservative grease.

Soon we were visiting the local wood yards and learning about Iroko, Idigbo and other exotic sounding timbers as well green elm in great 3in square lengths to bolt to the aluminium gunnels of the lifeboat as a foundation for the superstructure. Plywood arrived by the acre and Aerolite, ready mixed in large  cardboard drums. Brass screws came in thousands and an assortment of aging woodworking machinery moved into the garage.

Boat building on this scale is not really a one man job so family and friends were all recruited. I remember being deeply impressed by how far you could bend a length of wet, green elm and even more so by what happened when you tried to bend it too far. 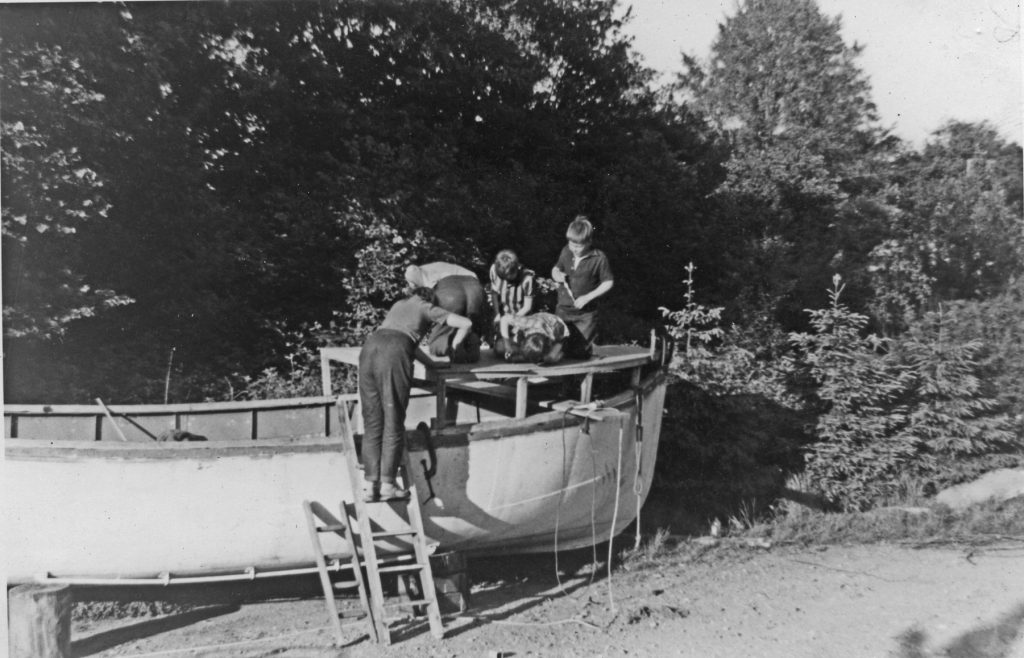 All hands laying the foredeck

The shell of the superstructure seemed to appear quite quickly but then things slowed down. I don’t know whether this was due to loss of enthusiasm, lack of time or if Dad began to feel that he had bitten off a bit more than he could chew. Things progressed in fits and starts for a year or two and then his sudden death brought it to a halt. The lifeboat was sold as an unfinished project and I have no idea what became of it.